Fred was a black and white stray cat that came to live at the Woodbury Public Library in 1976. Previously, Fred had been freeloading at the local Police Department, but she decided to find a permanent warm home inside the Library. She lived the contented life of a fat and well-loved cat, mostly in the Children’s Department in a special cardboard box. She was a local celebrity.

Then in 1984, the fur flew! A Woodbury resident, complaining of cat allergies and phobias, wrote to the Governor of Connecticut that she couldn’t use her local library. The citizens rose up in defense of Fred. School children passed out petitions in support of Fred remaining in the Library. After investigation by town attorneys, the Library Board of Trustees voted to allow Fred to remain in her home for the rest of her natural life. This controversy propelled Fred and the Town of Woodbury into the national spotlight, including coverage in The New York Times, People Magazine and television. Fred passed away in December of 1986 of natural causes at the age of fourteen, but her legacy lives on in the Woodbury Public Library forever. 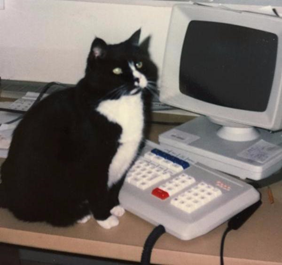 Be sure to check out Woodbury Poet Laureate Sandy Carlson’s ODE TO FRED as well!